Joining NewsLife and iKana, iKanji is the 3rd ThinkMac Mac app to graduate to version 2.0! It’s been under development for a good few months and it’s great to finally have it ready to put into your hands. As is starting to become the new normal, I find myself with a completed product ready to ship but with the Mac App Store version stuck in review land. So if you prefer to have slower updates and to give more of your money to Apple*, then please go ahead and wait for them to finish reviewing it. However if you’d like to try (and maybe even buy) iKanji 2 right now, here you go! (* we earn about 20-25% less per sale on the Mac App Store)

I’ve redesigned iKanji to be a lot more like its iPhone sibling. Kanji sets are now in a list and are subdivided into groups of 20. You can have multiple practice sets and I’m working on making syncing possible with iKanji touch. For now you can import and export your sets to share between computers, although you’ll have to do it sneakernet style. Kanji can be viewed as a list or as a bunch of tiny flash cards although gone is the cork texture and faux paper from earlier versions.

Cork’s out, linen is in and everything looks smarter and more modern

Search has been improved quite a lot. You can now perform multi-radical searches and search for more specific sets of kanji attributes including grades, stroke counts and so on. It’s very useful to be able to search by radical parts for identifying unfamiliar kanji. 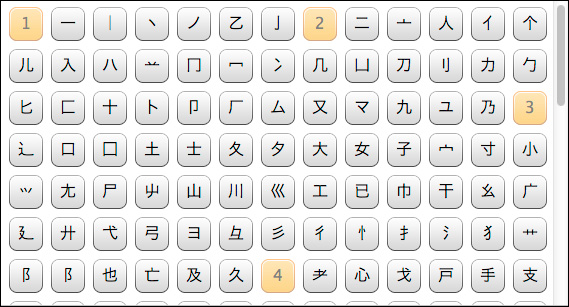 iKanji 2 introduces the spaced repetition training system from iKanji touch. The SRS system will guide you through learning kanji readings and meanings. Testing stroke order on a desktop or laptop is hard because nobody wants to try writing kanji using a mouse or trackpad and you lose the 1:1 physical connection and muscle memory you employ when you’re writing on paper. So for now I’m leaving stroke order out – it makes sense on the iPhone and iPad so please use these devices to practice writing Japanese instead.

Following in iKana 2’s footsteps, iKanji now includes vocabulary training. Learning kanji in isolation is hard so I think this is a super important and useful feature for Japanese learners. Using the same spaced repetition system as kanji training, you can now learn thousands of words which will help you put kanji into context. The vocab browser also gives you a breakdown of the meaning for each kanji in a word. I find this absolutely fascinating and hope you do too. For example for “了解” you can see the two kanji mean “complete, finish” and “untie, unravel”. Can you guess the meaning of the word? It’s “comprehension”, i.e. once you’ve completely unraveled something you comprehend it. 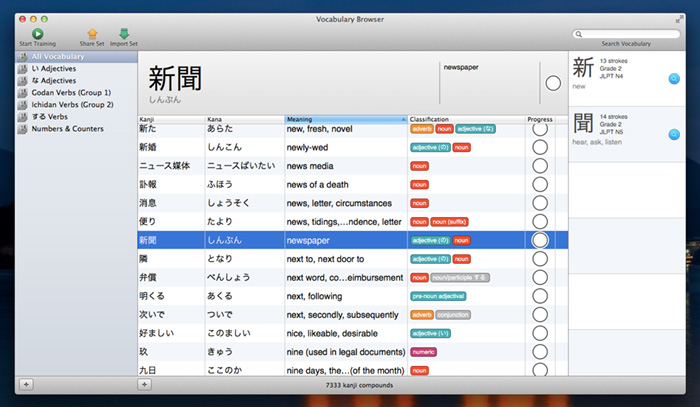 Put kanji in context and learn words rather than just readings

There are lots of other little tweaks, fixes and changes too that will make using iKanji 2 a nicer experience but instead of me waffling on about them I recommend just downloading the app and trying it for yourself. iKanji 2 will run for 10 minutes at a time in trial mode so you can try all the features out before deciding if you’d like to purchase. It will be available on the Mac App Store in the next week or two hopefully, if you prefer to buy from there. iKanji requires OS X 10.7 (Lion) or later and is developer ID signed for Gatekeeper. This is a paid update for all customers unless you’ve purchased iKanji 1.5 recently. Specifically we’re offering free upgrades to customers who purchased iKanji on or after September 2012. Just get in touch if you qualify and we’ll send you a free iKanji 2 license.