The idea of having a mascot character for an app may seem a little strange at first, especially in the West where mascots are more usually associated with things like sports teams and fast food. But in Japan mascots are ubiquitous; most companies have their own, each prefecture has one, and even buildings like the Tokyo Skytree use them. As an important part of Japan’s modern culture, I felt it was a nice idea to have one in iKanji touch too.

When you think of characters in software you may remember old versions of Microsoft Office with its frequently unhelpful and annoying virtual assistant, Clippy. That was definitely not the direction I wanted to take with iKanji touch. The mascot is something intended to add visual flavour and personality to the app (and hopefully make you smile), but it’s not something that should get in the way or make the app feel jokey or cartoonish.

I had the idea of having a little fox character be the mascot. Foxes are culturally important in Japan and are seen as messengers of the god Inari. I tasked my friend Craig Ede with designing the character and he came back to me with these sketches and the name Tsutsune (pronounced tsu-tsu-neh). A play on the word kitsune (fox in Japanese). You may notice Tsutsune’s spiky hair looks like the katakana character tsu (ツ). 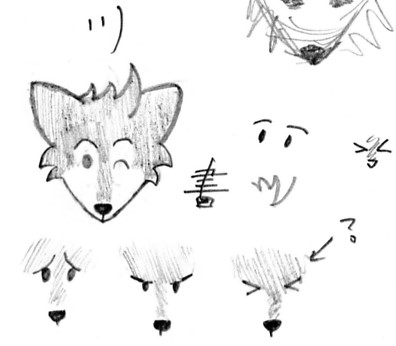 Within the app Tsutsune keeps a watchful eye while you study without distracting. When you’re taking a test you may notice he’s started smiling, a sure indication that you’re doing well. If he’s frowning on the other hand things may not be going quite so well! The only time he pops down from the top bar of the app, is to offer some words of encouragement (or admonishment!) once you’ve completed a test and the score is revealed.

Here are some fun Tsutsune facts:

← Christmas Savings!
Coding to keep the lights on →