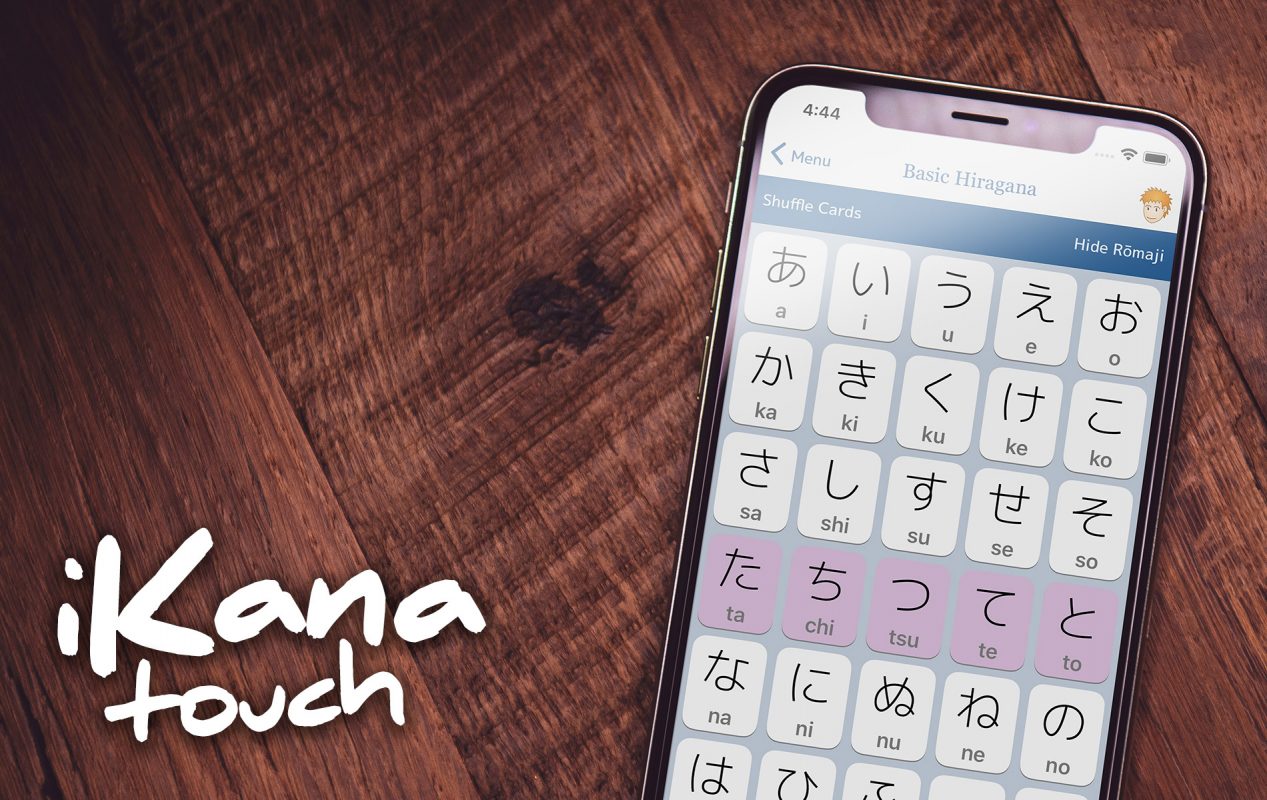 iKana touch is the fun and easy way to learn Hiragana and Katakana, Japan’s two phonetic alphabets. We’ve put together some great features to help you memorise, speak, read and write the characters right on your iPhone, iPod touch or iPad.

Easily browse through all the Hiragana and Katakana characters which we’ve organised into sets to make them easy to practice. You can also build your own practice set and review characters you’ve answered incorrectly in the tests.

View stroke animations for each kana, hear them pronounced by a native speaker and try drawing them right on the screen. 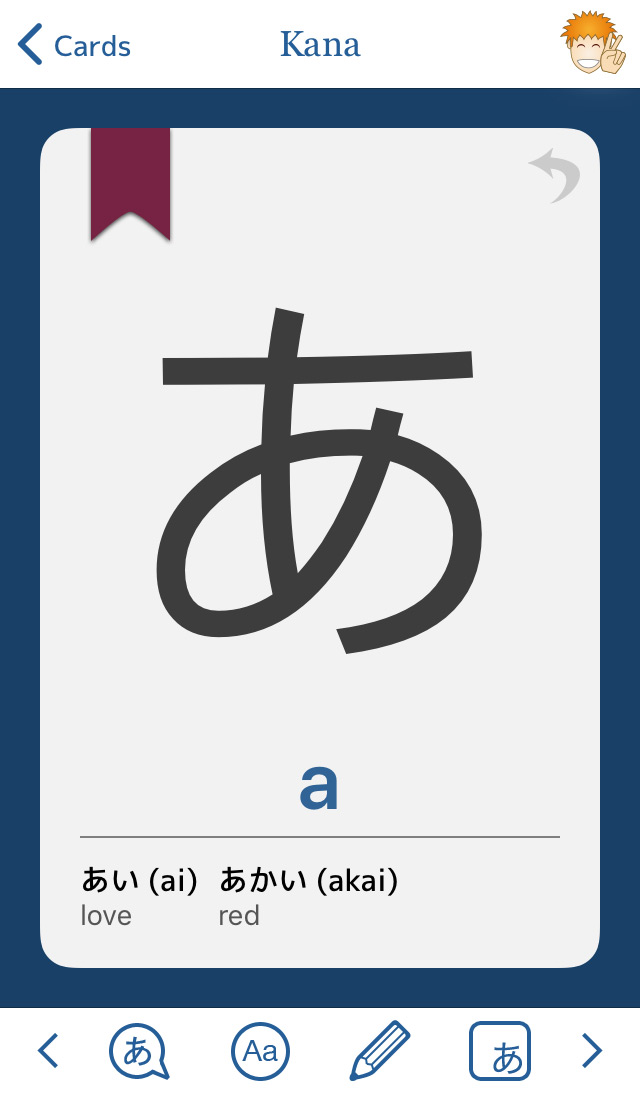 iKana touch features simple, easy to read flash cards with example words and the romaji for each kana. You can flip over the cards to reveal the stroke order animation and stroke count. 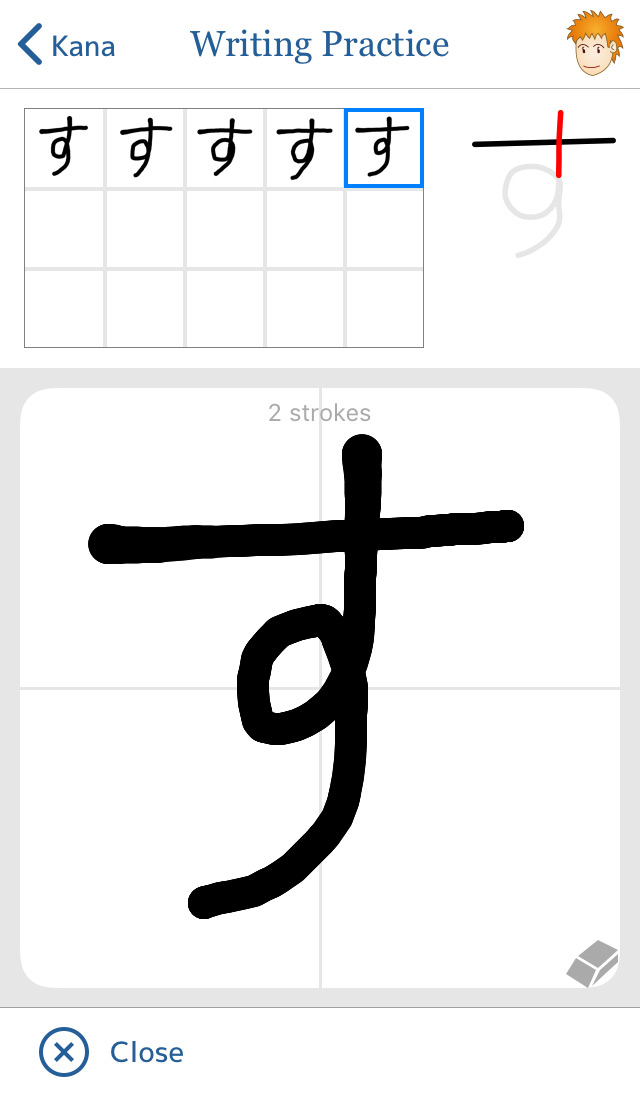 Repetition is one of the surefire ways of commiting kana to memory. iKana touch lets you write out each character as many times as you want, while watching the stroke animation to make sure you are not making any mistakes.

Get iKana touch on the App Store

iKana touch is free to download with in-app purchases to unlock the hiragana and katakana sets.

Test your kana knowledge and expand your vocabulary 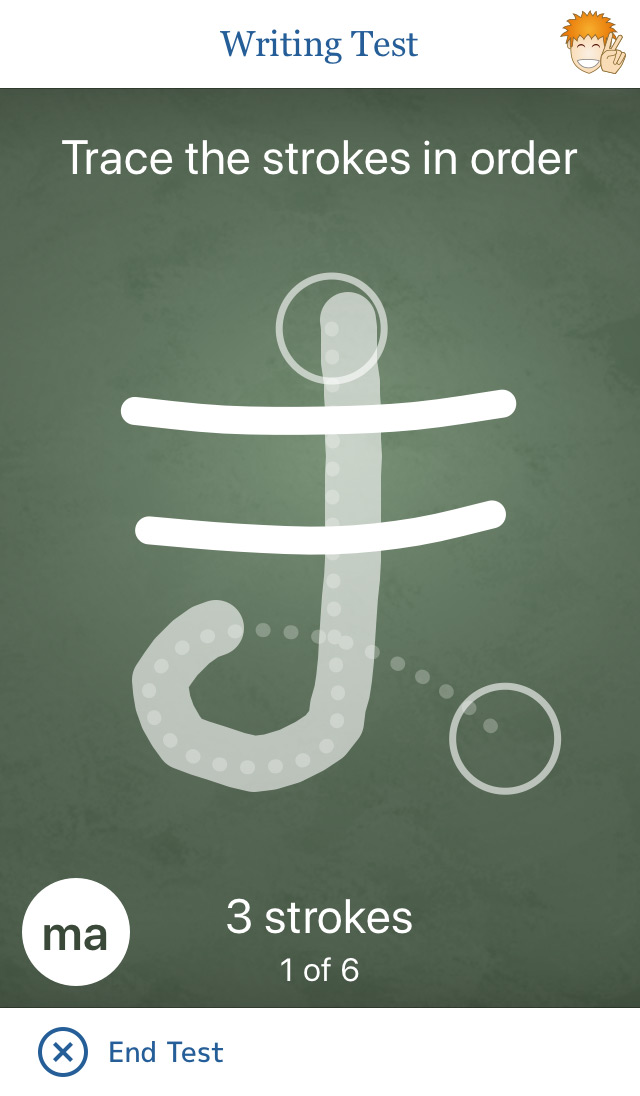 The Kana Writing Test requires you to trace the strokes of a kana in the correct order and direction. Simply drag your finger between the circles and watch the stroke appear. 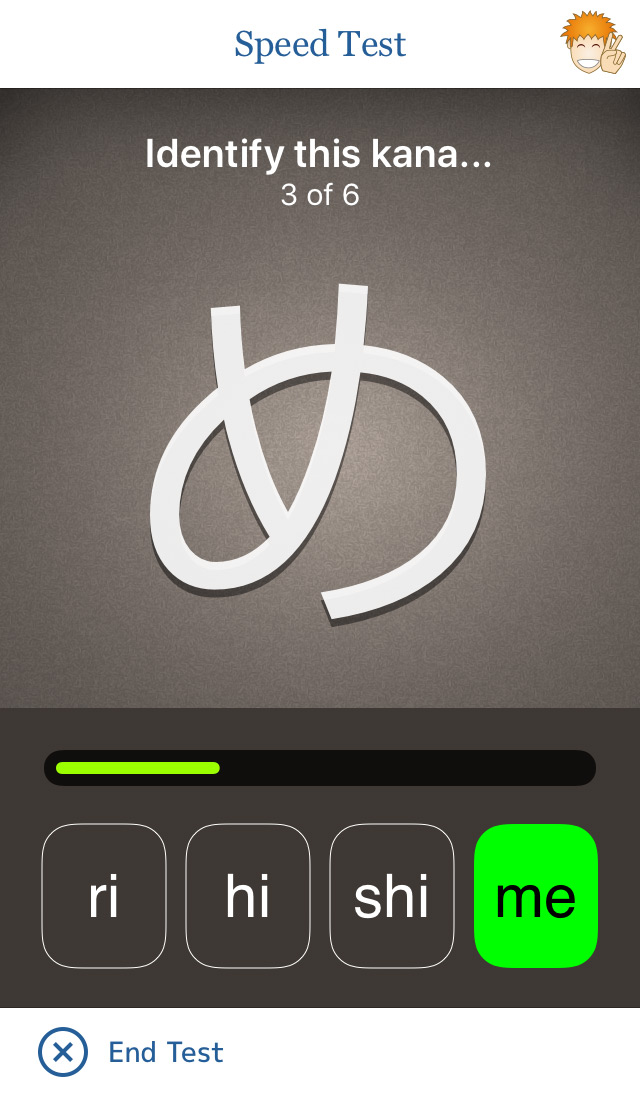 In the Speed Test you have to correctly identify the displayed kana before the timer runs out. This test is designed to help improve your kana recognition skills which will ultimately help you read kana more quickly. 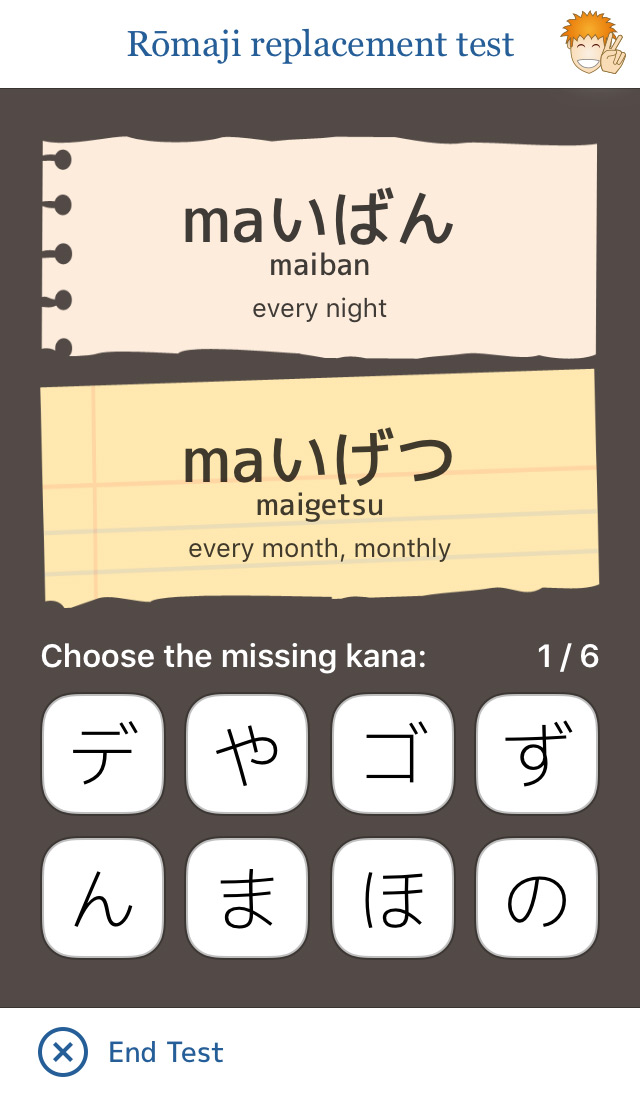 New in iKana touch 2.5 is the Romaji Replacement Test. One or more example words are shown from the dictionary with several of the kana swapped for their rōmaji equivalents. This test will help you learn new vocabulary and lets you see kana used in the context of words rather than just on their own. 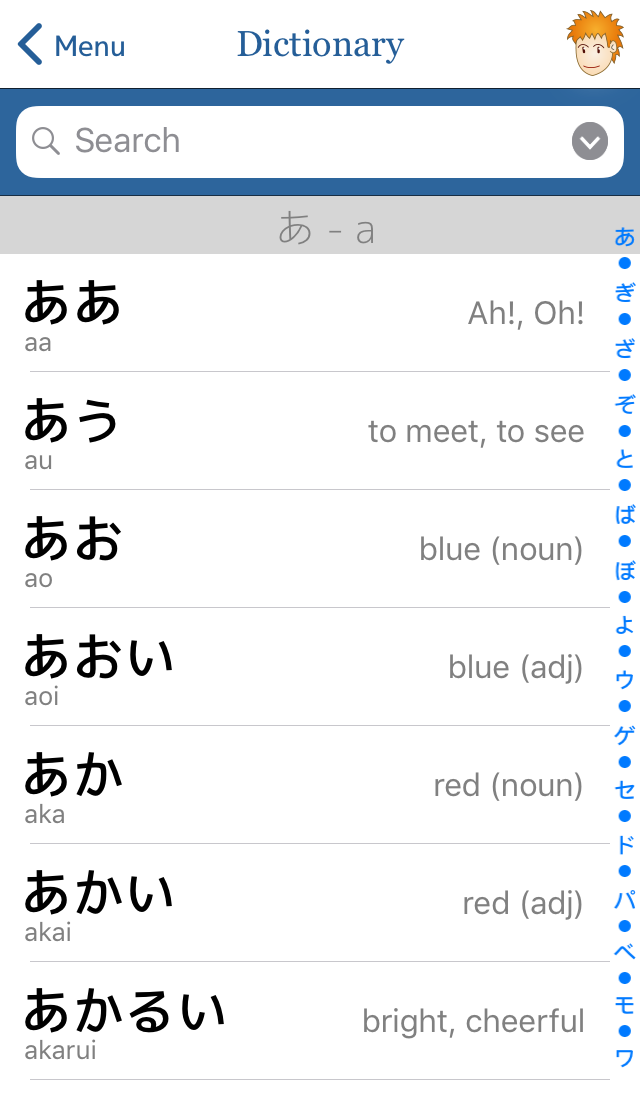 We’ve included a dictionary with over 800 simple Japanese words in a mixture of hiragana and katakana with English meanings. A great starting place for beginners. Easily search or scroll through the alphabetical list (sorted by kana from あ (a) to わ (wa)). 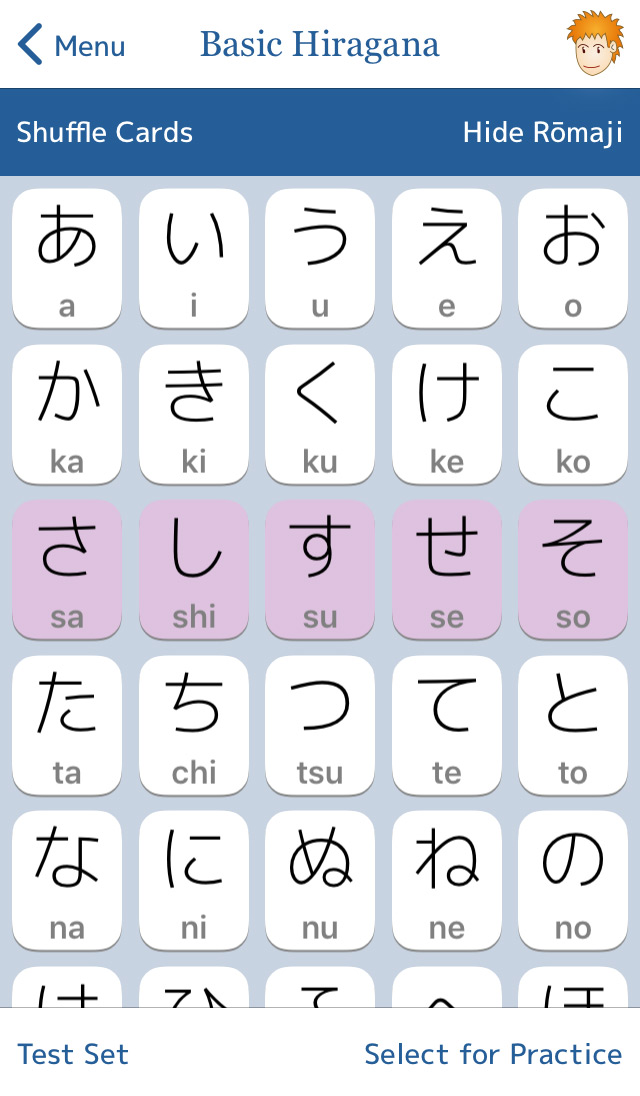 You can quickly toggle whether rōmaji are visible or not and you can randomize the card order if you’d like to test yourself using the flash cards directly. There’s a button on the flash card screen to briefly show the rōmaji so you can check if you correctly identified the kana.

This website uses cookies to improve your experience while you navigate through the website. Out of these, the cookies that are categorized as necessary are stored on your browser as they are essential for the working of basic functionalities of the website. We also use third-party cookies that help us analyze and understand how you use this website. These cookies will be stored in your browser only with your consent. You also have the option to opt-out of these cookies. But opting out of some of these cookies may affect your browsing experience.
Necessary Always Enabled
Necessary cookies are absolutely essential for the website to function properly. This category only includes cookies that ensures basic functionalities and security features of the website. These cookies do not store any personal information.
Non-necessary
Any cookies that may not be particularly necessary for the website to function and is used specifically to collect user personal data via analytics, ads, other embedded contents are termed as non-necessary cookies. It is mandatory to procure user consent prior to running these cookies on your website.
SAVE & ACCEPT